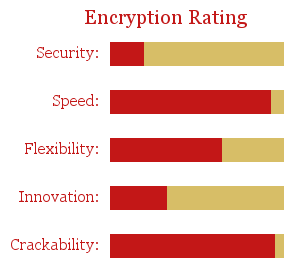 The Caesar Shift Cipher is one of the simplest and most common forms of text encryption in existence. This cipher uses simple letter substitution to take each plaintext character and shift it by a predetermined value. The resulting ciphertext is unreadable to the naked eye, but easily deciphered by anyone with the shift value, or enough time to test every value. Static text length and easy identifiability also decrease the strength of this cipher, but these downsides are generally outweighed by its simplicity and ease of use.

The Caesar Shift Cipher is named for Julius Caesar, Roman dictator between 49 BC and 44 BC, who was said to have used it to transmit military correspondence not meant for public view. Though not very secure in modern perspective, this simple shift cipher was more than enough to prevent Caesar's enemies from understanding his messages, because of a general lack of understanding of cryptography. The professional use of this cipher quickly declined as cryptography became better understood, but its simplicity has caused it to have a large upswing in casual use.

The actual encryption of the plaintext is simple, take a character, convert it into a number, add a fixed value, convert back to a character, repeat. If the value of the character plus the fixed value exceeds 26, it loops back to the beginning of the alphabet. Decryption of the cipher is just as easy; if the shifter is known, subtracting it from the value of the ciphertext quickly reveals the message. The Caesar Shift Cipher is one of the easiest to crack, even without knowledge of the shifter. The two most common methods of cracking this cipher are the brute force method and the frequency analysis method. Brute force takes the ciphertext and prints it out 26 times, displaying each possible version of the plaintext; then it is up to the user to decide which one is the message. By using letter frequency analysis, the most likely message can be displayed without any user input. This method utilizes a frequency log, which contains a breakdown of how often each individual letter is used in the English language. Every possible combination of plaintext output is analysed, and the one with the highest English value probability is displayed. This method utilizes the fact that certain letters, such as E, T, A, and O, are used often, and other letters, such as Z, Q, X, and J, are used rarely. Though letter frequency analysis can be fooled by some shorter phrases, it is generally highly accurate.

Place text here to encrypt it:

Place text here to decrypt it: